The most significant traditional festival in China is the Spring Festival which marks the start of the new year. The associated customs include a family reunion. But the big economic gap between rural and urban areas in China causes many people to choose to work in cities.

For the majority of them, the Spring Festival 7-day holiday is the only chance to go home after a year of hard work to revisit their parents and children. It produces the country’s, if not the world’s, largest migration movement which is also known as the Spring Festival travel season (Chunyun 春运).

However, because of potential pandemic risks, the Chinese government suggested people celebrate the 2021 Spring Festival where they are and released a series of policies to support the functioning of key social services, such as supermarkets, logistics, etc. Since the government does not prohibit people from going home, the personal choice is on everyone.

For the NYU Shanghai community, especially those whose families are not in Shanghai, what choice did they make, and why? For people who didn’t go back home, what was their experience of this Spring Festival?

Rex Tang is a senior who comes from Chongqing in south-western China and 2021 is his first time celebrating the Spring Festival away from home. “I had dinner with my friends on the Eve,” Rex said. “I gave myself a real holiday. Running in the city, playing cards, and fishing. These are things I want to do but I don’t usually have a chance to do.” It seems Rex didn’t feel uncomfortable about taking his Spring Festival away from family, in fact he enjoyed it. He believes it is the most relaxed Spring Festival he has had.

Visiting relatives at his hometown is boring for him because he meets only some of them once a year. There’s no difference between them and strangers, he says. Various activities during the Spring Festival are vital parts of the custom and family-centered activities limit his free time.

“I’m not saying that staying with family is bad, I just prefer to have a holiday in which my time is completely controlled by myself,” he said.

The Office of Student Life held a series of events to encourage all NYUSH community members to celebrate this festival in Shanghai. “About 800 students, including Go Local, received our New Year’s gift package,” said Patty Xu, who was in charge of events. Student Life also held a New Year’s Eve dinner in the cafeteria one day before the Eve. The Youth League also offered gift packages to students who reported their stay in the city. 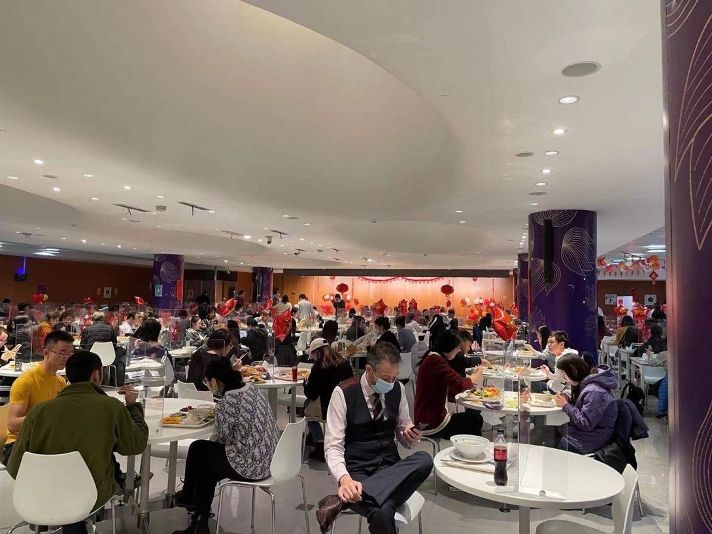 A large number of NYUSH staff also stayed in Shanghai. The ayi in charge of the second floor of Pudong campus happily displays her photo of two new houses she bought for her sons in Chengdu.

“I have spent four Spring Festivals in Shanghai. All the ayis didn’t go home this year,” she said.

According to Chinese policy, people who made trans-provincial travel between city and countryside needed to carry the negative result of their nucleic acid test (NAT) done within 3 days. In other words, for a 7-day holiday, most people needed to do two NATs for both going home and getting back to their job. And if their stopovers included middle- and high-risk areas, they needed to be quarantined.

The ayi seems be comfortable celebrating Spring Festival in Shanghai. But she still exudes a bit of regret about not staying with her families during the holiday. She said the company she works for recommended strongly that all employees stay in Shanghai. It also offered subsidies during the holiday to lower the risks of employees being unable to get back to work on time or even be quarantined. “It’s unnecessary,” ayi says.

However, not all members of the NYUSH community considered staying in Shanghai as their first choice.

Ryan Bai, class of 2022, comes from Wuhan where “it is safe now,” he said. “So, I chose to go home.” When considering whether he had a plan B if Shanghai or Wuhan became a middle-risk city, he seemed confident. “I don’t think Wuhan will become a middle-risk city because it is the safest place in China. As for Shanghai, even if it became middle risk, it doesn’t affect me going to Shanghai. So, I didn’t have a plan B.”

He just needed to inform the community about his place of departure and phone number. An NAT was not required but he did it. And he had no difficulties during the trip.

Conditions changed for Kehl Li, class of 2021. He is from Dalian, Liaoning Province. He stayed in Shanghai because Dalian had just been downgraded to low-risk from middle-risk.

“I’d like to go home. I like the Spring Festival with my mom and dad,” he said, “but I worried about the potential risk that if I go back home and either Shanghai or Dalian become a middle- or high-risk city, that would be problematic because I would be quarantined.”  So the main reason he chose to stay is that he might be quarantined for 14 days if he left Shanghai.

This year was the first time that the whole NYU Shanghai community had to decide between tradition and reality. And it was not without personal conflict. Even though the university tried its best to create an environment as close to the festival’s values as possible to help members, especially those from outside Shanghai, it was a special but different Spring Festival.

An interesting trend was that more people, especially younger generations, were more willing to celebrate the traditional festival with friends, instead of families. For example, in China, traditional festivals are always related to family reunion. Custom requires young people to go back home to meet their parents. This will be an excellent chance for parents to talk about children’s studies, jobs, income, etc. People aged 20 to 30 who are not married will probably be urged to get married.

These problems cause wide anxiety and discomfort among young people. Compared with being “controlled” by parents during festivals, the young feel more relaxed to be with friends. At least they can “completely control” their time.

The global pandemic and the New Year in situ policy gave people a chance to choose a way that they’d really like to celebrate the festival. Driving their choice was an understanding of its meaning. A festival can be a holiday to take a rest. It can be a rite, as well.

In normal circumstances, it includes both. An increasing number of people wanting to celebrate it as only a holiday may indicate a trend that the rite is fading from memory. In the post-pandemic era, we wait to see whether tradition or reality wins out.

Next article: Returning to China For the First Time as a Chinese-adoptee-American